Oops, I haven't posted in over a month now...since I haven't heard any complaining I think it's safe to assume it hasn't affected anyone's stress levels - ha!

Over the past month, I've slowly been easing back into climbing and slowly been easing out of road riding. I'm still riding semi-regularly however without the intensity that I was prior to the Test of Metal. Despite this I've moved up into the Cat.3 race at the Tuesday night criteriums and last week saw my first success in the new category. Right after the prime sprint about halfway through the race, I attacked and joined one other guy up the road. Slowly and steadily we put time into the pack so that eventually they were out of site, however not quite out of mind.

With two laps to go, and me suffering like a dog up the incline every lap the group had pulled us back within sight. It wasn't to be a day for the sprinters though and on the last lap my breakaway companion attacked me at the top of the climb. I couldn't respond enough to challenge him but I held on for 2nd place which I was really happy with, especially considering my lacklustre training regime as of late.

So now, the Mt. Seymour Challenge. The Wednesday prior to the race I decided to determine if I would enter the race or not by riding Seymour and see how my fitness was, since the Sunday before, for the first time ever I had actually turned around at the 2nd switchback and limped home with my tail tucked between my legs. With this fresh in my mind, I approached the climb with some tredpidation that day. During the climb I knew was definitely going hard but it was difficult to tell how well I was going since I hadn't ridden it strong in a long time and couldn't remember my gearing and I also lacked a speedometer. When I hit the line in 43:15, one minute fifteen seconds faster than my previous best I was shocked to say the least! This did however, serve to prompt me to ride home and register for Sunday's race with a grin on my face.

I should say that in general, I wouldn't consider myself all that competitive of a person, with the exception of bike racing. That is the one thing that has taken over from swimming in highschool in which I desparately want to beat every other person in the race. Also, I find it preferrable to demolish the competition if at all possible...har har har. Unfortunately this doesn't happen too often but here's to trying!

Sunday morning rolled around and we were off to Seymour. The weather was perfect...about 16 and drizzly with really low clouds making for excellent conditions to pretend one was in the Tour de France on one of the famous mountain top finish stages in miserable weather! To top it off, I had a cheering squad of three comprising my ever supportive wife, my best friend Brow who is visiting from Ontario and his girlfriend Leah.

The Cat.4's peeled out of the start gates and the pace was comfortable for me so I relaxed a bit and followed wheels. After about 3 km found that I had worked my way to the front of the group. At that point a fellow I know, Noah, came around me and lifted the pace. I knew he was a strong climber so when I saw that he was content to try and ride the rest of the race by himself off the front, I quickly jumped away after him. I followed his wheel around the first switchback and for another few hundred meters until I saw him downshift one gear. I realized he was probably getting a bit tired holding the pace so I came around him to take up the work.

Without lifting the pace, I looked back and saw that I had gapped him and by the 4 km mark I found again, similar to Cypress a few months before, that I was riding my own race. With the help of Car, Brow and Leah cheering me on, I charged up the rain-soaked slopes of Seymour to post one more win for the 2009 season, and a second personal best within the week at a time of 39:04! I was ecstatic to have broken the 40 minute barrier and won the race at the same time.

Much thanks to Car for driving the psyche-mobile and to Brow and Leah for shooting the great photos and videos below...enjoy.

Warming up in the Specialized/Dizzy Cycles tent before the race. 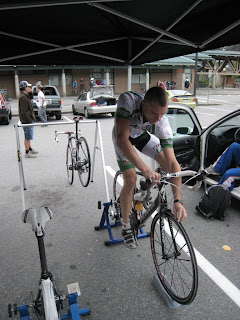 The pack on the lower slopes of the mountain while the race was still gruppo compato. I'm in 2nd wheel here in the foreground. 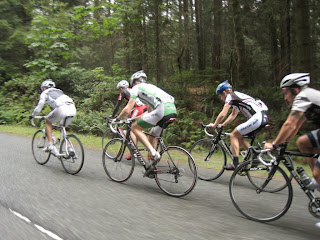 Noah setting the pace with me stuck to his wheel like Elmer's school glue a few moments before he dropped off the pace. 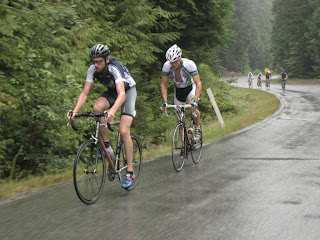 On the attack, Jens Voight style with noone in sight anymore. 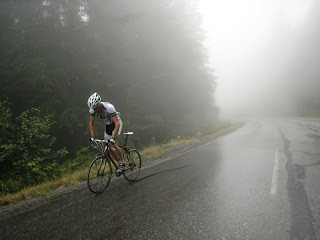 Pushing hard around the final switchback and zipping up as the temps drop. 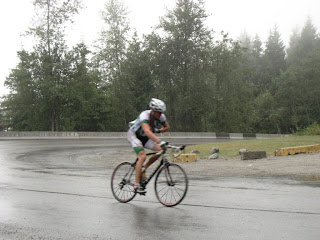 Driving the nail into the coffin approaching the finish line. 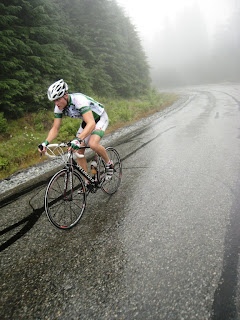 In the early stages of the race, around km 2.
Noah pacemaking with me on his wheel, shortly before I went solo around km 4.