Last night I finished work and really felt like pushing out some Watts so I decided to ride out to Whytecliff and see if I could better my avg. speed of 31.3 km/h of my last attempt earlier this year.

I've been feeling a little slow and less fit lately as I haven't been fitting in the higher mileage weeks that I was earlier in the season prior to the Test of Metal race so I wasn't too sure how it would go.

Anyways, I got on my bike and started pedalling out to North Van. I kept the pace high but was spinning quite quickly to limit the energy I was putting into it early in teh ride before I was fully warmed up. Even with this, I could definitely feel my legs weren't feeling great by the time I hit the Lion's Gate bridge.

After about another 10 min. or so of riding though they seemed to be running a bit smoother so I began to add some more coal to the boiler and stoke the fire. I hit Whytecliff Park, rode around the loop and turned around, heading for home.

Coming back over the Lion's Gate bridge into Stanley Park the legs were burnin' but I stomped on the gas until the trip odometer registered 60 km completed. I checked my avg. speed and I had totally demolished my previous best. I ended up clocking in at 33.0 km/h!!! I was super psyched considering I didn't think I really had the fitness that I did 3 weeks ago but perhaps some rest after the Test of Metal has proven beneficial to my body.

The weekly crit was cancelled this week due to bad weather but I'm excited to race again next week and hopefully have it act as my debut with the Cat.3 boys. I'm also aiming to keep my fitness high since I'd like to race well in the Mt. Seymour Hill Climb on August 9th...we'll see though since more and more these days I'm getting really psyched on downhillin gon the Northshore and up at Whistler! Duh duh duuuuh....
Posted by Fras at 12:37 PM No comments:

The Return of the King

I tried climbing again last weekend to see how my shoulder would respond and it went pretty well. There was no pain the following morning as there had been the previous time about 4 weeks earlier so that was positive.

The one bummer was that I think I managed to strain a tendon in my right hand middle finger in the Whistler Bike Park on the Thursday before. It may have been good though that my finger limited the difficulty of the problems I tried...

Anyways, I'm hoping that this is finally it after 4 months of waiting and cycling like a madman and I can finally return to my favourite sport! Oh and by the way, I don't actually think of myself as the king but I did find the title appealing.

I'll hopefully try to get out at some point this weekend to do some more moderate climbing...keep you posted.
Posted by Fras at 12:27 PM 1 comment:

Here are a few photos that were captured of the race... 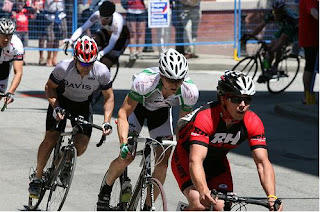 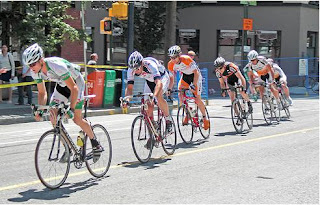 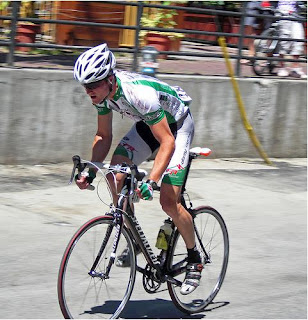 Hey hey! So I had an absolute blast this past week beginning at about 3:30 on Tuesday afternoon when I left work. The Yaletown Grand Prix was the next day (Canada Day) and it was to be the first downtown crit race of my career!

I actually slept quite well considering that I had placed some weighty goals on myself without knowing anything about how hard it would be or who would be racing. I woke with the usual blend of excitement and pre-race anticipation and decided that the best solution would be a healthy stack of pancakes; a little cyclocross trick I learned from my bro Max.

I rode over to the race at about 11:30 and arrived in time to help our team director set up the tents, trainers and other stuff for the team. I got registered and then began that annoying part of racing...waiting for the start. I must admit though, it wasn't too bad with so much going on and so many people milling around.

At about 1:30 they let us onto the course to do a few warm up laps before sending us out of the gates. I should mention that the start format was kind of cool; they had us ride one neutral lap behind the lead car before firing the gun to actually start the race with a rolling start...it felt like we were at a bonafied pro race even though we were only racing Cat.4...Cool!

From the gun the boys hit the front running whipping up a fast pace that left yours truly gasping and struggling to move up. Although caught off guard with the quick start, I made sure to move up at least 5 wheels along the back straight by shoving my nose into the wind and sprinting up the line. Within about 4 laps I was sitting in a better position in 2nd wheel coming winging through the start/finish gate. Leaning hard into the first righthander, the Escape Velocity rider in front of me took the turn too wide, ran into the curb and went down in a mess of legs, arms and bike sliding into the hand railing for the restaurant. Boom, Yaletown claims its first victim. The next two laps I traded off the front with a few others before the next calamity struck.

Coming around turn #3 into the steep punchy climb, I heard the familiar sound of carbon and metal scraping the asphalt. Not turning around to check out the action we kept riding, and that ended up producing the winning breakaway. A less than ideal way to have a winning move form but I guess that's part of bike racing. I'm not entirely sure how that 2nd crash happened but apparently someone locked bars with someone else to bring down a few racers.

As the laps ticked by, the four of us were working quite well together and after sprinting for few of the primes and collecting myself $75, we had a new joiner bridge up to us. Unfortunately Rider X didn't feel the need to contribute to the effort and ended up sitting on the back well past the time that one might reasonably give someone to recover after a bridging effort.

This is how it was to be though, and I had made up my mind that to win the race, I was going to have to win the 2nd last corner. There wasn't enough space to open a full sprint between the final turn and the finish line and I was pretty sure nobody would risk passing coming into the last corner either.

So there we were firing through the start/finish line getting the one-lap-to-go bell. I pulled through after the chicane and thought perhaps I had moved to the front a touch early but I punched it up the hill and leapt out of my saddle at the top thinking I would drill it down the back straight and try and hold the gap into the final two turns. I looked behind me and I definitely had the gap and was holding it. One more glance sure enough found Rider X with his fresh legs bridging up to me with ease and coming around me into the 2nd last corner.

Unfortunately Rider X wasn't quite preared for the speed that he was carrying into the turn and took a wrong line sending him too wide on the exit and hammering into the rental fence barrier. As this unfolded about 15 feet in front of me while we were doing probably 40 km/h, my brain started sorting through a list of items that needed to be taken care of rather quickly. Firstly don't follow his line, secondly slow it down and thirdly, don't wait for the mangled bike to come flying off the fence into my line of travel before trying to avoid it. Thankfully all 3 got sorted and just as the wrecked bike came unnervingly close to my bike I had veered far enough right to get around it and back on line for the last corner. One more corner was all I knew I needed to take this thing...I came in low and on the exit jumped to my feet and sprinted with anything I had left to realize about 3 meters from the line that noone was coming around me and I had won my first legit bike race!

There was no way I was throwing away an opportunity like this to unleash a fervish victory salute, so like Max taught me, I punched the sky with my fists and celebrated my good fortune.

Although it was a bit scary at times, it was quite an experience and will help serve to launch me into my Cat.3 racing career! I'll post up some photos from the race in a day or two.
Posted by Fras at 6:30 PM 2 comments: