This past weekend was insane in Vancouver; the weather was sick, the Olympic celebrations only seem to be getting crazier (there were apparently 150,000 people downtown on Saturday night) and the weather in Squamish unlocked an inspiring session for me all day Saturday.

It started with my inaugural ride to Whytecliffe Park for 2010 with Booky...it was amazing. It was under bluebird skies, 10 deg. C and traffic was light as we pedalled along on cloud nine. That night we went down to Granville St. with a big group and had a blast at a small restaurant called Deuce Bigalows. Some of the higlights included watching some drunken lunatic climb up a 25 ft lamp standard and proceed to hump the post in front of the better part of Vancouver's population, and speed walking over the Burrard Bridge with Foyter in hot pursuit!

The next day I got up early, shook off the haze from the previous night, slammed some espresso and jumped into the Squamish rocketship. Upon getting to the parking lot (first car there as usual on the weekends during pre-season) another car pulled up and it happened to be a guy I had met through Wes a few weekends ago. I ended up climbing with Nathan and his two friends from Mexico, Miguel and Bernardo for the day and it was super fun. I ended up ticking off a really hard V5 called John Rocker, a great V6 called Mr. Bigglesworth and another tough V5 called A Kind of Magic that my friend Brad showed me beta for (thanks Brad!) that made it not so tough anymore.

The real coup de grace came on the last problem of the day though; a stout V9 called Defender of the Faith. Previously I've never been able to do any of the moves on it, and upon some occassions I was actually unable to even hang the starting holds. However, with a month and half of dedicated and consistent gym training, cool temps and Brad giving me some of the best spots I've ever received, I not only did the first move, I unlocked every other move too! I couldn't believe it! I was so excited and encouraged by the huge progress I'd made in strength in the past 6 weeks of being in the gym and doing core workouts.

Sunday morning Sizzle and I went over to Lynn Valley and did some fun sport climbing which culminated in Sizz flashing a 5.10b on toprope which was really incredible since he never climbs but is probably the most talented natural athlete I've known and picks things up crazy quickly. Nice work Sizz!

Below are some random photos from the past week including some of the Olympic festivities in Vancouver and also some of the tree blossoms that are in full effect on Cypress St. right now...Molto Bene!!! 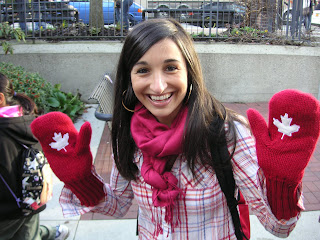 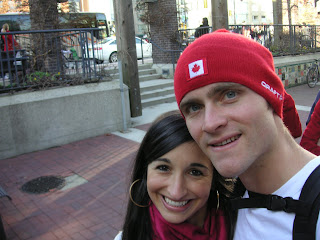 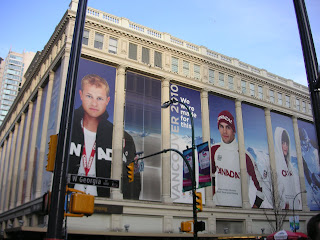 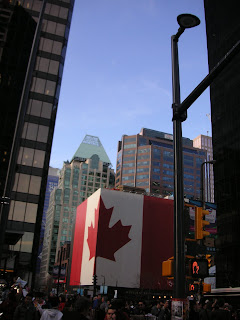 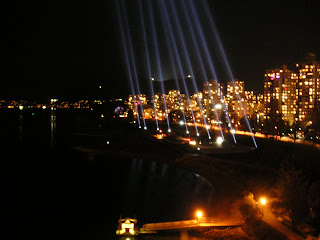 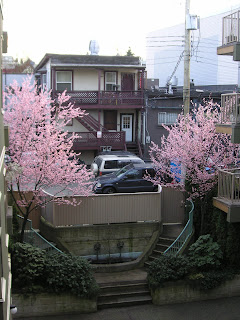 Our backyard in our condo 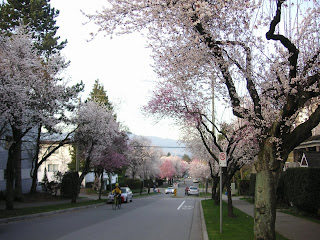 The jaw-dropping beauty of Cypress St. in full bloom 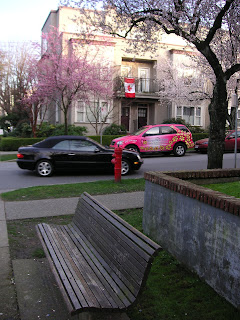 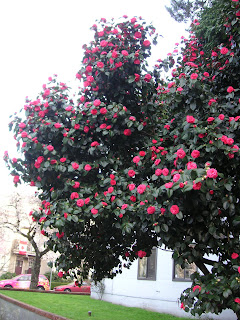 One of the many cool rose trees that blooms in Vancouver's springtime
Posted by Fras at 7:05 PM No comments:

I've got it full ON!!! We watched the torch relay go past 3rd and Burrard tonight and it was super fun! It's so excitign to see so many people all buzzing with the high of celebrating sport and our country right here in our city.

What surprises me is the number of people that don't seem excited about it or even further, actually resent that the Olympics are being held in Vancouver. Personally I don't understand the attitude of wanting to get out of town and away from everything during this once-in-a-lifetime opportunity to experience an Olympics in the city where you live. I think it's an amazing way to bring people together. So what that some roads are closed and so what that there are thousands of tourists roaming around the streets. Use this opportunity to get on your bike or walk somewhere you would normally drive to...and maybe all the extra people will see how utterly amazing it is to live in this one-of a-kind city and the value of your real estate will go up.

No matter what your reason, it's always more fun to be positive about something, even if you're not that psyched on it. (It's even more fun to be psyched on it by the way! Ha ha...I'm SOOOO psyched on sportclimbing right now!) So get out, see the attractions and celebrate with your fellow Vancouverites and tourists alike...these next few weeks will be gone before you know it and you'll be left with your pants down wondering what all the hype was about.
Posted by Fras at 9:45 PM 1 comment: